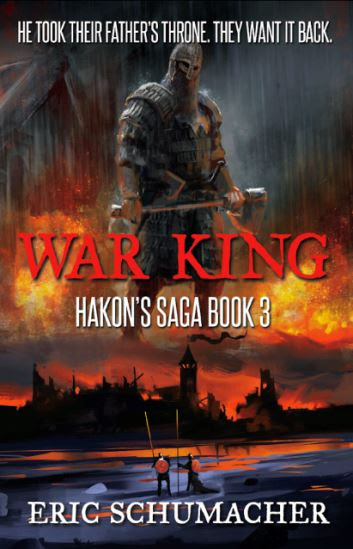 It is 954 A.D. and a tempest is brewing in the North. Twenty summers before, Hakon Haraldsson wrested Norway’s throne from his murderous brother, Erik Bloodaxe, but he failed to rid himself of Erik’s family. Now the sons of Erik have come to reclaim Erik’s realm and avenge the wrong done to their father and their kin. They do not come alone. With them marches an army of sword-Danes sent by the Danish King, Harald Bluetooth, whose desire to expand his realm is as powerful as the lust for vengeance that pulses in the veins of Erik’s brood. Like storm-driven waves, the opposing forces collide in War King, the action-packed sequel to God’s Hammer and Raven’s Feast.

Praise for the Hakon's Saga

"I was swept up in the action and enthralled by the descriptions of Hakon’s struggle." -Roundtable Reviews "I highly recommend this historical fiction novel, both for its entertaining story and historical information." -Historical Fiction Review- "A story of war, family, sacrifice, honor ... one that keeps your blood pumping and your fingers turning pages rapidly. I can't wait to dig into the next." -Goodreads Review

Eric Schumacher was born in Los Angeles in 1968 and currently resides in Santa Barbara, CA with his wife, two children and dog. He is the author of two historical fiction novels, God’s Hammer and its sequel, Raven’s Feast. Both tell the story of the first Christian king of Viking Norway, Hakon Haraldsson, and his struggles to gain and hold the High Seat of his realm. More information on Eric and his Hakon Sagas can be found on his website. You can also connect with Eric on Twitter, Facebook, Goodreads, and AuthorsDB.


What inspired you to write your first book?
I literally had an “ah-ha” moment. I was sitting under a tree in a park in Germany, surrounding by old buildings and studying for a test of some sort. Quite suddenly, a thought jumped into my head, and it was: “I should have been an author.” Of course, that thought occurred to me when I was in my second year of business school with a boatload of school loans to pay off, so casting it all aside to become the next great American author was not in the cards. That said, I did go home that afternoon and start writing what would eventually (10 years later!) become God’s Hammer, my first book.

Do you have a specific writing style?
I like books with the kind of action and adventure and historical description that keeps the pace going and transports me to a different era. That is what I try to deliver to the readers of my own books.

How did you come up with the title?
In War King, the main character, King Hakon, is being attacked by his nephews and by the Danes. The attacks are unrelenting, and so the title just popped into my head. I normally have about 10-15 titles that I come up with and choose from, but in the case of this novel, it was pretty clear from the outset.

Is there a message in your novel that you want readers to grasp?
Not really. I am more interested in sharing Hakon’s story with the world. He is a lesser-known king during the Viking Age, but I find his story fascinating. I wanted to cast a light on it and share it with others who like this genre of book.

If you had to do it all over again, would you change anything in your latest book?
I don't think so, but ask me again in a year. Usually I think of something else for the story long after it’s in print.

Do you recall how your interest in writing originated?
I have always written or created stories. As a little kid, I played the board game Dungeons & Dragons and created adventures for my brother and my friends to play. In school, I gravitated to writing projects and after school I came home and wrote short stories. Strangely, I never thought of it as a career until I was older and married. If I could do it all again knowing what I know now, I would have pursued writing as a career from the moment I had the chance.

Can you share a little of your current work with us?
At the moment, I am focused on the launch of my third novel, War King, and researching for my next novel. I haven’t locked down exactly what that new story will be yet, but I hope to soon.

Is there anything you find particularly challenging in your writing?
Just finding chunks of time to write. That, to me, is the biggest challenge.

Who is your favorite author and what is it that really strikes you about their work?
Do you have to travel much concerning your book(s)?

Who designed the covers?
My covers were designed by BlueSpark Studios in Los Angeles. I have worked with the lead designer there for years. A hugely talented guy.

What books/authors have influenced your writing?
There are several authors who I love to read, but the one who has influenced me the most in terms of writing style is Bernard Cornwell.

What genre do you consider your book(s)?
Historical fiction or a subset of that, historical adventure.

Do you ever experience writer's block?
Not really. I can usually get something on the page. It may not be right or good or what I want to say exactly, but I rarely sit staring at a blank page. I suppose I am fortunate in that regard.

Do you write an outline before every book you write?
Yes. I try to keep it pretty high level, but I always have an outline and notes.

Have you ever hated something you wrote?
Hate is a pretty strong word. I have definitely written things that are cringe-worthy.

What is your favourite theme/genre to write about?
I love writing about history and people living in turbulent times or facing extreme challenges as a result of historic events. The Viking Age is my primary fascination, but I also love other eras too. The Migration Period and WWI are periods that I’ve long considered writing about.

What are your expectations for the book?


I want nothing more than people to enjoy my book.

During the Blog Tour we will be giving away ten copies of War King (ebooks and paperbacks)! To enter, please enter via the Gleam form below. Giveaway Rules – Giveaway ends at 11:59pm EST on November 6th. You must be 18 or older to enter. – Giveaway is open to readers in North America and Western Europe. – Only one entry per household. – All giveaway entrants agree to be honest and not cheat the systems; any suspect of fraud is decided upon by blog/site owner and the sponsor, and entrants may be disqualified at our discretion. – Winner has 48 hours to claim prize or new winner is chosen War King Launch Giveaway