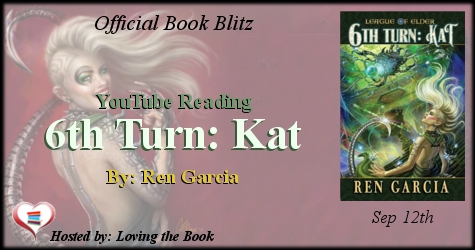 This Blitz is a bit of a change of pace for us We are doing something different and fun as Author Ren Garcia is making YouTube videos telling you the backstory of each chapter in his book and then narrating the chapter. The Treasure Hunt Questions will be based on the videos and you can answer the questions in the Rafflecopter.

Ren Garcia is a Science Fiction/Fantasy author and Texas native who grew up in western Ohio. He has been writing since before he could write, often scribbling alien lingo on any available wall or floor with assorted crayons. He attended The Ohio State University and majored in English Literature.

Ren has been an avid lover of anything surreal since childhood. He also has a passion for caving, urban archaeology, taking pictures of clouds, and architecture. He currently lives in Columbus, Ohio with his wife, and their four dogs.

Raised in the dark under the lash of the Black Hat Sisterhood, when the woman who would become known as Kat, is sent on a suicide mission into the heart of the League, she was not expected to survive. Her mission: discover the identity of the fabled Shadow tech Goddess, a being who does not exist. All other considerations, including her possible death, are secondary.

But, Kat is guided by higher powers, by merciful hands that feed her, clothe her and whisper in her ear. As she watches the sun rise for the first time, she recalls their words: “Be strong,” they said. “You have much to live for.

The Autocon inside her body swam through her Shadow tech like a giant parasite. It cajoled her along the way with its icy Shadow tech voice:
“Do not die! The Black Abbess is invested in your success. Die, waste our training in you and we will reclaim our Shadow tech and cast your soul to Hell where it will be devoured for the remainder of eternity … Do not die!”   --Kat, along with a tormenting demon, confined within an atmosphere suit.

1-      Shade Church – YouTube: https://www.youtube.com/watch?v=mjc0OiikC0g
Question: How many crawlers, besides Kat, were selected by her “angels”?
A: 3
B: 2
C: 1
D: 4
2-      Send to Die – YouTube: https://www.youtube.com/watch?v=iB73rrVJ-fc
Question: What happened to Kat’s Autocon demon?
A: It died during the journey to Kana
B: She convinces it to return to Shade Church without her
C: She captured it within an arcane device.
D: It captures Kat and forces her to complete her mission

3-      The Ruins – YouTube: https://www.youtube.com/watch?v=HoHefUpoZ_w
Question: What did Kat encounter at the bottom of the stairs?
A: A dead body
B: A treasure chest
C: Nothing—an empty room
D: The Shadow tech Goddess

4-      Bird, Walk, Wheel and Kat – YouTube: https://www.youtube.com/watch?v=cbdJwUB0eLM
Question: Which of Kat’s sisters decided to go below into the catacombs?
A: Bird
B: Walker
C: Wheel
D: Karma

See our Official Event Page for links to where you can find the rest of the Treasure Hunt Questions.