Based on the remarkable true account of a young American who landed in Liberia in 1961.

Ken Verrier is not happy, nor at peace. He is experiencing the turbulence of Ishmael and the guilt of his brother's death. His sudden decision to drop out of college and deal with his demons shocks his family, his friends, and especially his girlfriend, soon to have been his fiancee. His destination: Liberia - The richest country in Africa both in monetary wealth and in natural resources.

Nothing could have prepared Ken for the experiences he was about to live through. He quickly realizes that he has arrived in a place where he understands very little of what is considered normal, where the dignity of life has little meaning, and where he can trust no one.

Flying into the interior bush as a transport pilot, Ken learns quickly. He witnesses first-hand the disparate lives of the Liberian "Country People" and the "Congo People" also known as Americo-Liberians. These descendants of President Monroe's American Colonization Policy that sent freed slaves back to Africa in the 1800's have set up a strict hierarchical society not unlike the antebellum South.

Author Dan Meier describes Ken's many escapades, spanning from horrifying to whimsical, with engaging and fast-moving narrative that ultimately describe a society upon which the wealthy are feeding and in which the poor are being buried.

It's a novel that will stay will you long after the last word has been read.

“A short time after hiring Ku, I went into the kitchen. He was at his waiting station looking at me. I opened the door to our ancient kerosene-fired refrigerator.
“Wha you wan, boss? Ku get it fo you,” he said, slipping from the stool and putting himself between me and the contents of the refrigerator.
“Something to eat, Ku.”
“No worry, boss.” Ku said, “We ha good stew, good meat—no bush meat—and French baguettes, fresh may t’day, from da new market. Vey goo.”
“Great, Ku. If you would prepare it, I’ll have it out on the porch. That’s where I’ll be.” I retrieved a bottle of beer from the refrigerator, popped it open, and left to find a chair on the porch. Thirty minutes later Ku brought the stew and several slices from the baguette. I had been in Africa long enough to have learned that if something tastes good, don’t ask what it is. However, this time I thought I’d try:
“This is great, Ku. A little different, but delicious. What is it?”
Ku grinned. “Oh, boss, don’t worry. It white man food. I kno why you askin. It no bugabug. It not time for bugabug.”
“Bugabug? What’s bugabug?” I asked.
“Bugabug is wha ya call termites.”
“Termites? You eat termites?”
“Oh, yeah, boss. Dey good. But dey only come out two time a year.”
“How so?”
“Well, you know they live in de big big mounds. Mounds bigga n me. An every now and den, de queen, she decides to move. So dey all move. Swarms and swarms and billions and billions all leave at the same time to find a new home. An das when evybody go get ’em, cook ’em, and eat ’em. Dey real good, boss. Kinda tase lie crunchy chickin.” 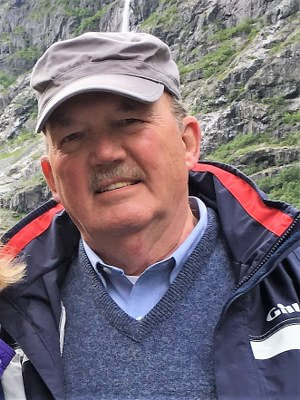 A retired Aviation Safety Inspector for the FAA, Daniel V. Meier, Jr. has always had a passion for writing. During his college years, he studied History at The University of North Carolina Wilmington and American Literature at The University of Maryland Graduate School. In 1980 he was published by Leisure Books under the pen name of Vice Daniels. He also worked briefly for the Washington Business Journal as a journalist and has been a contributing writer/editor for several aviation magazines.

Dan and his wife live in Owings, Maryland, about twenty miles south of Annapolis and when he's not writing, they spend their summers sailing on the Chesapeake Bay.

Diamonds in the Rough

We all know the term “blood diamonds.” They are diamonds that have been used to finance African warlords, fund a military coup or support any rebel faction intent on killing their opposition. During our hero’s time in Liberia, however, the blood had not yet begun to flow. It was the 1960’s and the wealthy Americos had an iron grip on Liberian society and government. That’s not to say that it wasn’t an extremely dangerous and lucrative business, but the majority of diamonds were smuggled into Liberia from neighboring countries.
Liberia, being an independent republic for over a hundred years, had been bypassed by the international diamond cartels that set the prices of diamonds in the rest of the world. All prices in the Republic were set, therefore, by the local gem market, no matter where they came from.  Liberia was a diamond smuggler’s paradise.
“A rough diamond might begin its journey a thousand miles to the east by residing in the bowels of a closely watched native miner who, under the guns of overseers, would swallow the muddy gems and pass them later in the night outside the mining area. From as far away as Chad or Upper Volta, a gem would travel first by overland trails then be sold surreptitiously to the Mandingos. From there, it would move by motorized transport or bush taxi to Bamako or Ouagadougou. It would change hands a few times before beginning the long journey west, possibly in a chartered taxi with a number of Mandingo merchants.“
Unlike neighboring Sierra Leone where the country was literally cluttered with diamond mines, Liberia’s mining business was in its infancy. What mines they had were far inland and approachable only by air. They were also all artisanal, which is to say, that it was done with minimal technology and generally illegal. Countries like South Africa, on the other hand, had a sophisticated diamond industry and  would tunnel deep below the earth’s surface with heavy machinery. 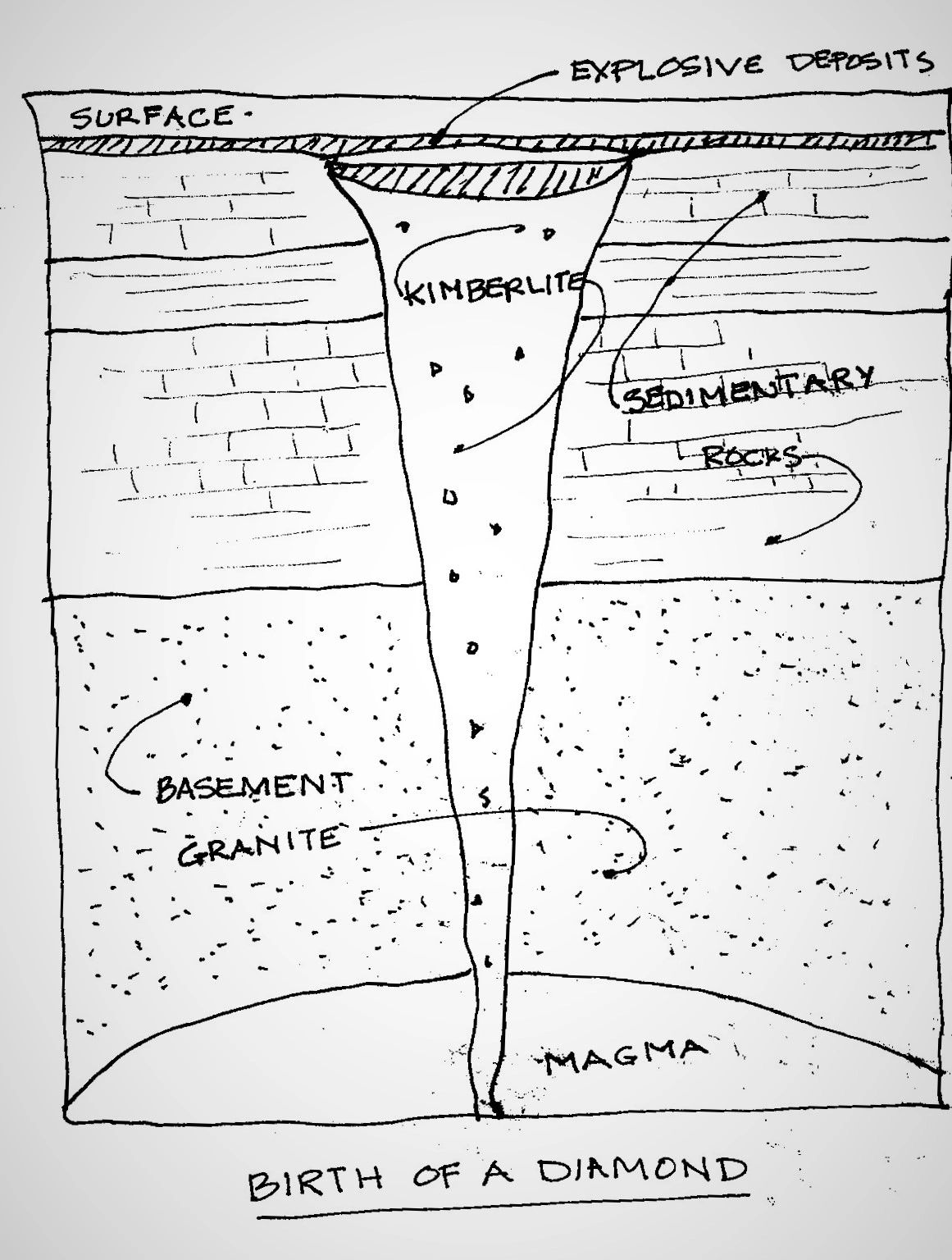 The actual creation of a diamond begins approximately 100 miles underground where extreme heat and pressure crystallize carbon into rough diamonds. Volcanic eruptions, that took place in the Jurassic era, known as kimberlite pipes, as well as igneous dykes pushed the diamonds to the surface. So, the search for diamonds starts with the search for kimberlite. Some say that digging under a termite mound is a good place to begin as the termites have already dug deep into the ground revealing the existence, or not, of kimberlite.
Liberia’s pre-civil war low-tech mining is referred to as alluvial diamond production, because the search is focused on the soil deposits created from water flowing over kimberlite flood plains or in riverbeds. It was wet, back breaking labor in extreme heat, and it was done by men, women and children. To this day, there are open pits where workers pan for diamonds. Diamonds are handed over as soon as they are found in hopes of locating more nearby and, of course, to eliminate smuggling. 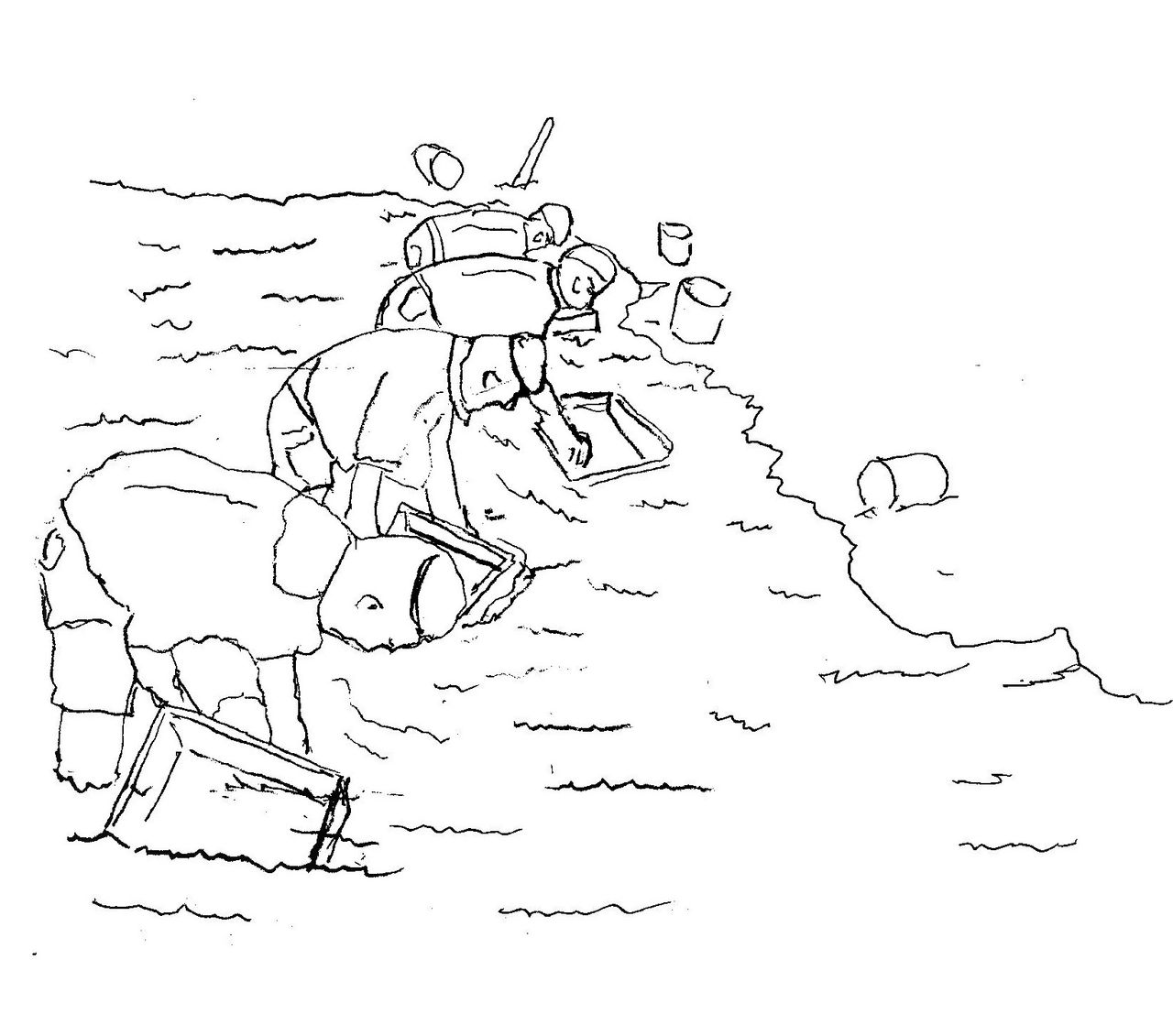 In South Africa it was a different story and smuggling was made very difficult. Some of the mines were like huge concentration camps with dogs and guards patrolling the perimeter day and night. To leave the premises, workers’ stomachs would be x-rayed. If a spot was found by the scanner, he’d be put in the hospital and thoroughly purged. Many workers would swallow pebbles or nails to see if the “white man’s magic” really worked. And guess what. It did.