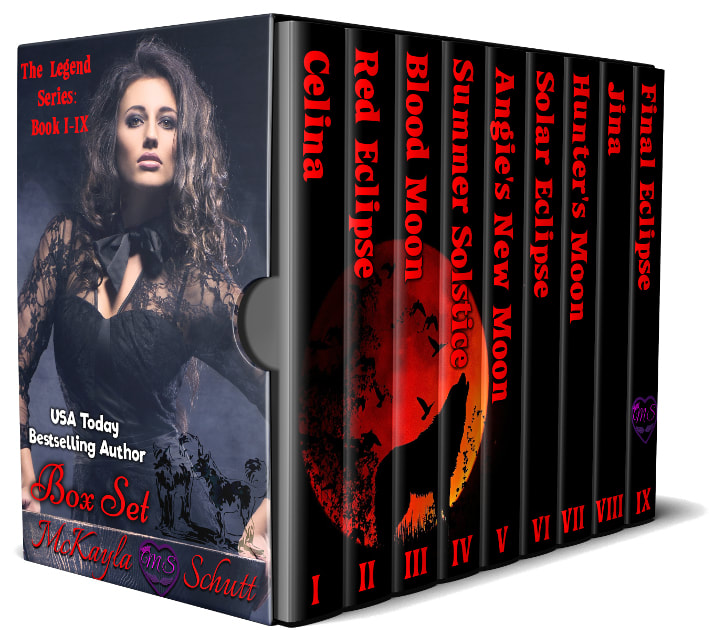 A witch and a wolf imprint, what could possibly go wrong??

Celina
Celina is faced with the one choice she never wanted to make between her mate and her child how would she choose?

Blood Moon
Maria knows nothing of the magical blood flowing through her veins… when she imprints with the alpha, everything starts changing.

Summer Solstice
New beginnings aren’t supposed to start with werewolf imprint…now Carmen must choose, her wolf mate or her old way of life and time isn’t on her side.

Angie’s New Moon
Angie desires a life with a mate so she pushes down her fear and travels… but things she feared are coming true and she can’t stop what’s coming.

Solar Eclipse
No one believes Walter when he says, danger is coming, sticky spells and imprinting with Amethyst could prove him right or destroy the wolfpack coven.

Hunter’s Moon
Finding her mate should be the easiest part of Luna’s witchy life but he’s been raised to hate witches, will he abandon her like her parents or stay with her till death?

Jina
Tragedy and lies have been Jina’s whole existence but now she needs her second chance with her werewolf mate, she’ll find it or die trying.

Final Eclipse
Love is the last thing on Samara’s mind, as a hunter of supernatural beings she needs to stay focused, but Devin calls to her in a deep level that puts both of their lives on the line.

Fall in love with the Legend Series wolves and witches today.

“You must be a witch because your ass is bewitching me bad.” The male’s voice broke into Celina’s thoughts as she was walking back to her sister and friend. The bar was crowded for a Monday but that had a lot to do with the summer month of July. Everyone was trying to party as much as they could before the cold weather returned. “That was awful.” Celina chuckled as she turned to the male trying to pick her up. He would have no clue she was a witch unless he was a wolf. Her breath stopped in her lungs as she took in his sharp features, stubble dusted jaw, and dark hair. “It was. Sorry, I normally have a good wing man but he had to go back home.” He shrugged. “Why wouldn't he come out on a night like this?” The spring air held a crisp side to it from all the rain in the last few days. “He had responsibilities to take care of.” He pushed his fingers through his dark brown hair. “I see. Well, wolf, are you going to touch me or keep staring like an idiot?” Celina rose an eyebrow. “What's your name?”  His eyes captured her attention, making her body tingle.

“That’s all I have to bring to your attention.” Derrick stood. “Oh, yes. I bet your mate is waiting for you at home.” Maria smiled. Derrick moved toward the door. “Do you have a mate?” Maria asked when his hand reached the door. He turned to face her, their gazes met. “I don’t. Still waiting for the imprint to happen.” Derrick scratched the back of his head. Something in his eyes told her he didn’t mean to say that last part. “Imprint? I hate to admit it but between me and you, I don’t have much knowledge about werewolves. Even though you’re all a part of daily life, all I know is each pack has an alpha, alpha’s have mates and mates have loads of kids.” Maria’s fingers played in her hair before she placed them back in her lap. She knew what imprinting meant but she wanted to keep him here for a moment longer. Something about him intrigued her. She wanted to get to know this man but the logical side of her said messing with him would cause damage to her career. I will be a clean politician, unlike Frank. “The reason male wolves don’t like to touch females is because they might imprint with someone they don’t know. The idea of being bound to someone without knowing anything about the other person scares a lot of wolves.” Derrick shrugged, a hint of sadness filled his eyes. “Interesting.” She stood and moved toward him. “Are you afraid of that happening?” Maria met his gaze. She liked staring into his bright blue eyes. “Not one bit.” Derrick smiled flashing his teeth. Even in his human form they seemed dangerous. Her eyes widened a bit but she stood her ground. She extended her hand, stopping just before the tips of her fingers touched his arm. “May I?” Maria raised an eyebrow. “Be my guest, but be warned. If I imprint with you, the door will be locked as I take you on your desk.” Derrick’s eyes narrowed like they were challenging her. Her own stupid brain never backed down from a challenge even with her brothers in lose-lose battles. Her breath caught in her throat and her hand faltered for a second when she thought about her career. If she imprinted with him then everything would be flipped upside down for her. “And if I’m not your mate will you do the same thing?” 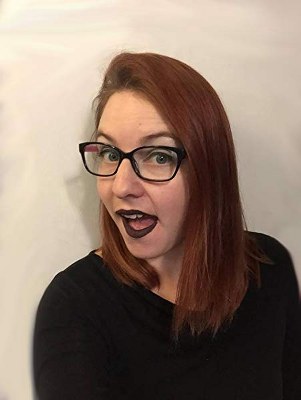 McKayla loves to write books about sexy werewolves.
Now a USA Today Bestselling Author!
She's a stay at home mom of two in the state of Wyoming. Born in California, she misses the hot weather all of the time. Her goal- to write as many sexy books as possible. However, being a mom of two little ones can take time but she is pushing to finish her work to get more books out for her lovely fans.
Ever since she was little she wanted to be a writer but doubters said that it would be impossible to make money at it. She is pushing herself hard to show them they are wrong.
She would like to remind everyone to review what you read, it's important!