Demon in the Whitelands by Nikki Richard Blog Tour and Giveaway :) 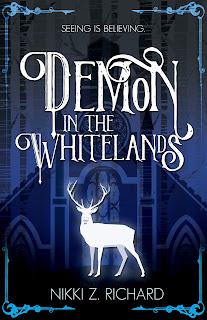 Sixteen-year-old Samuel, son of a devout cleric, has endured shame and prejudice his entire life. Though he is destined to follow in his father’s footsteps, he longs for an ordinary life in the whitelands away from talk of demons and holy roots.

When the mayor claims to have captured a mute demon-girl, Samuel is forced to become her caretaker. But as Samuel gets to know the prisoner, he finds her not to be very demonlike. Instead, she is intelligent, meek, and an exceptional artist. Despite her seeming goodness, some more concerning things cannot be ignored. Samuel is hard-pressed to reconcile her uncanny strength and speed, one missing arm, ambiguous gender, and the mysterious scars covering most of her body.

Samuel forms a deep attachment to the girl with predator eyes and violent outbursts, against his father’s advice. As their friendship threatens to become something more, Samuel discovers the mayor’s dark intentions. Now, he must decide whether to risk his own execution by setting her free, or watch as the girl is used as a pawn in a dangerous game of oppression, fear, and murder. 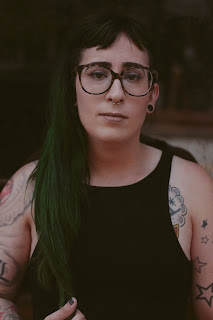 Nikki Richard is a sensitive queer writer with moods and coping mechanisms. An MFA graduate from the University of Baltimore, she lives in the city with her hot wife, amazing daughter, and fluffy cat.

1.) What inspired you to write your first book?
Demon in the Whitelands tells the story of sixteen-year-old Samuel, the bastard of a cleric, as he struggles to endure in a dystopian society that has marked him as an outcast. When the mayor of a northern town claims to have captured a demon girl, Samuel becomes appointed as the demon’s caretaker.

When I used to daydream about writing this first book, I knew I wanted to tell the story of an isolated young person befriending something nonhuman, even if it meant going against his father’s ardent religious beliefs. I pretty much ran with that idea, and that’s how Demon in the Whitelands came to be.

2.) How did you come up with the title?
Demon in the Whitelands wasn’t the original title, but (for me) it perfectly encapsulates the ethos of the book. I wanted a title that hinted at both a dystopian world and an ominous religious threat. I hope I did a decent job.

3.) Is there a message in your novel that you want readers to grasp?
Ultimately, I want the reader to know this book is about the necessity for interpersonal connection, and the importance of finding ways to better
understand one another.

4.) Can you share a little of your current work with us?
Of course! My biggest upcoming project is a new-adult queer dystopian novel that’s sort of a hybrid between Octavia Butler’s Parable of the Sower and Naomi Alderman’s The Power. I also have a collection of queer poetry I’m trying to polish up for submissions. I’m also working on the sequel to Demon in the Whitelands!

5.) Do you have any advice for other writers?
Don’t be afraid to let that “editor” voice, the thing in the back of your head critiquing every word you write, take a backseat when you’re working on a new project. I’m an English professor, and I always tell my students the first draft of anything is crap. That goes for “writers” too. Demon in the Whitelands didn’t really start to take life until I stopped trying to edit every word I could writer, and just let the story come out, blemishes and all.